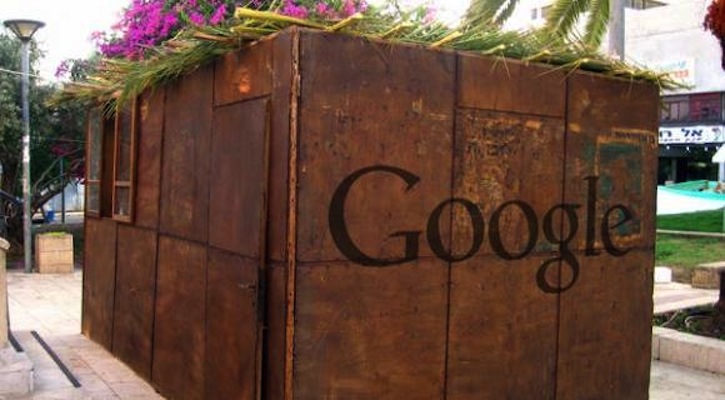 The company used the balcony of its headquarters in New York to build two 21st century booths for the holiday.

The Google sukkah has been built with an advanced video conferencing system, powered by Google Hangout. The sukkah includes android-themed hangings, lava lamps, exercise balls, stations for lego-building, a live-cam showing others in sukkahs, and plastered walls with Google colors.

Eleanor Carmeli, a Jewish worker (a Jewgler, according to the Google team), formerly of Google California, wanted to add some excitement to the Sukkot holiday. When he transferred to Google New York this past year, she spent some time to create the sukkah initiative.

“We entered the conversation with a sense of humility, realizing that sukkot is much lesser known than other Jewish holidays. There’s not a lot of space in New York City, so we went in with low expectations,” said Carmeli, referring to the first time she confronted management with the idea.

Google offices in Pittsburgh, Boston, Argentina, Dublin, and California will all have built sukkahs. Each of these sukkahs will allow a video conference call amongst each other and allow Jewglers to interact.

According to About Religion, “The sukkah hearkens back to times in ancient Israel when Jews would build huts near the dwellings not only provided shade but allowed the workers to maximize the amount of time they spent in the fields, harvesting their food more quickly as a result.”

Search-engine giant is building two Sukkahs in its New York headquarters, thanks to a 'Jewgler''s initiative.

especting halachic laws, Google will participate for the first time in the Jewish holiday of Sukkot, building two sukkahs in the company's New York office, the Jewish Week reported on Tuesday.

The religious initiative was encouraged by proud "Jewgler," colloquial term for a Jewish Google employee, Eleanor Carmeli. "We entered the conversation with a sense of humility, realizing that Sukkot is much lesser known than other Jewish holidays," she told The Jewish Week.

The New York sukkahs, per Google's standards, will not only sport the traditional Four Species, but will also incorporate such marvels of technology as QR codes allowing visitors to scan and learn more about the holiday, a video-conference system, and lava-lamps.

Carmeli's efforts have inspired other "Jewglers," and other sukkahs sprung up in Google offices wordwide, including in Pittsburgh, Boston, Argentina, Dublin and in California.

“It seems we lit a fire under other Jewglers,” Carmeli told the Jewish Week.